Kota Kinabalu is the capital city of Sabah in East Malaysia, a cultural melting pot and major tourist gateway to explore the northern region of Borneo Island or more popularly, 'Land Below the Wind'. Abbreviated locally as 'KK', the city is the seventh largest in Malaysia, hosting a population over 450 million people that compose a diverse variety of ethnic groups including native tribes of coastal and highland origin.

Surrounded by lovely beaches, tropical islands and picturesque landscapes, KK and its outlying regions are natural tourist magnets - home to an abundant range of hotels providing luxury and budget accommodation for family and business, with some exclusive world-class resorts that occupy entire bays.

Kota Kinabalu is named after Mount Kinabalu, the highest mountain in Southeast Asia (Kota means 'Fort'). Formerly Jesselton, the city was originally established by North Borneo Company in 1800. Jesselton was an important trade post and port in their southern campaign, but sometimes faced uprisings from the local population.

During World War II, it was captured by Japanese forces who held control until their surrender in 1945. Administration of Jesselton was turned over to the British Crown, who financed its reconstruction as the new capital of North Borneo (replacing Sandakan). In 1963, Sabah together with Sarawak and Singapore (later to exit) joined the Federation of Malaysia.

Kota Kinabalu is located on the central west coast of Sabah, the second largest state in Malaysia. The Crocker Range Highlands forms the mountainous backbone behind KK City that stretches along the west coast from Beaufort (south) to Kudat (north), while located in close proximity at sea are the islands of Tunku Abdul Rahman Marine Park, a popular resort getaway.

Half the city center is built on reclaimed land from its original historical spot at Api-Api Water Village (a name for KK still in use today by Chinese locals). The city has tropical weather (equatorial climate), with plenty of rainfall and temperatures ranging from 24-33°C throughout the year. The driest months lie between January and April while the rains are strongest between August and November.

Located under the Typhoon Belt, KK and Sabah as a whole generally enjoy strong winds that bring a cooling breeze to a usually hot climate. Sabahans speak the national language of Malay in a distinct Creole utilising a mixture of native words and Chinese (Hakka) slang, with a style and pronunciation close to softer-toned Indonesian Malay.

In addition, ethnic groups speak their own local dialects but acceptable English can be found in commercial and tourism circles. 'Bah' is a popular colloquial term used to emphasize a point or affirm dialogue in conversation, sometimes as a measure of acquiescence. Significantly different from West Malaysia, the culture is very friendly but laid-back. 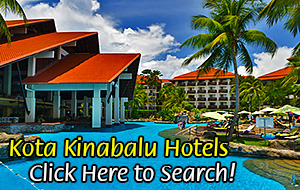